The four illustrations below show the final design including how the three artifacts would be displayed.  A satellite view of the location can be found on Google Maps.  Just search for “Red Run Lake, Rouzerville, PA” and zoom in.

The first picture is a front view of the entire site which would be located on the east end of Red Run Park.  It would face the long front parking lot behind the berm close to Route 16, and west of Skyway Ave and the lake (which is located to the right of this picture).  The tribute would be pentagon shaped, inscribed in a 30 ft circle.  Columns would be 10 ft tall, and the roof 18.5 ft tall at the peak.  We were also moving a WWII Memorial and cannon from a location between Blondies (a popular tavern and restaurant) and the Ruritan – a site which had become overgrown.  The WWII Memorial would sit to the left (west) of the tribute structure. 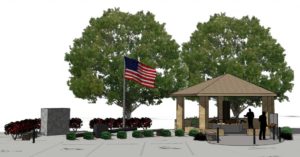 The second illustration is a view of the interior which would have a beamed roof and a 106″, centrally located, pentagon shaped pedestal.  The artifacts from the Twin Towers, the Pentagon, and Shanksville would be mounted on the pedestal. 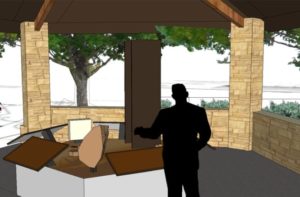 The entire surface of the pedestal would be a map of the mid-Atlantic area with small models of the three attack sites.  There would be reader boards on each side.  By a bit of luck, three of the five sides of the pedestal point almost directly at New York City, the Pentagon, and Shanksville.  Reader boards on those sides would speak to the events at each.  A fourth board would discuss casualties and responders.  The fifth board faces the front entrance and will address what lessons should be taken from these events. 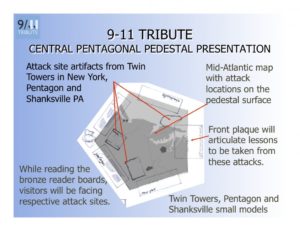 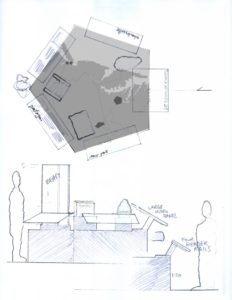 The last picture is the overall tribute layout in the park.  The main parking lot is at the bottom (Rt 16, south), the lake is to the right (east) just across the road leading deeper into the park and to private homes. 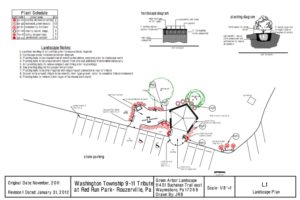