How We Acquired the Artifacts 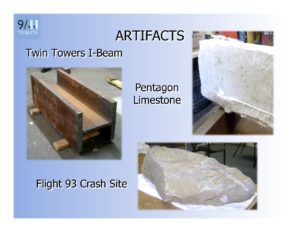 Steve Kulla, a township Supervisor and prominent local lawyer, saw an article in which New York City was offering portions of the debris from the twin towers.

Steve brought the idea to the July 6, 2011 Township Meeting at which the Supervisors agreed to look into getting the artifact from the World Trade Center.  Through their efforts, PA Congressman Shuster’s office contacted the Port Authority of New York / New Jersey on the township’s behalf, resulting in a letter requesting an artifact.  Upon approval, township personnel drove to Kennedy International Airport on September 21, 2011, returning with the artifact.

In the following months, Mike Christopher, Township Manager, opened a dialogue with his contemporary in Stoney Creek Township to see if we might get an artifact from the Shanksville area.  As a burial ground for the passengers and crew of Flight 93, we did not expect anything from the crash site itself.  However, when the National Park Service heard of our efforts, they coordinated with the Flight 93 National Memorial and The Families of Flight 93 to provide us with a rock from near the site from the park grounds.  Township personnel drove to Shanksville PA on December 13, 2011, to acquire the second artifact.

Meanwhile, a question arose whether we might also get an artifact from the Pentagon.  In time we made contact with the Pentagon Renovation and Construction Office who was able to provide a section of limestone from the side of the building.  Township personnel drove to Arlington VA on January 13, 2012, to acquire the last artifact.