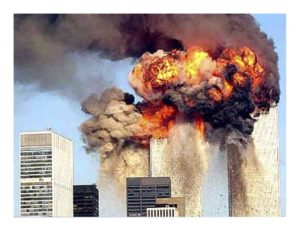 At 8:46 AM and 9:03 AM respectively, American Airline Flight 11 and United Airlines Flight 175 with a total of 147 crew and passengers flew into the World Trade Center’s Twin Towers in New York.  Military fighters scrambled too late to intercept the second attack.  Both buildings collapsed within two hours, destroying a third building in the process.  Fires and toxic debris persisted for weeks.  2753 people – 20 crew, 127 passengers, and 2606 civilians and responders in the towers and on the ground–died immediately or in the aftermath of the attacks and collapse. 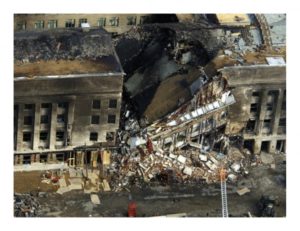 Just after 8:50 AM, shortly after the first plane struck the World Trade Center, American Airlines Flight 77, traveling from the District of Columbia to Los Angeles, was hijacked and steered off-course.  At 9:37 AM, the aircraft, flown by 5 hijackers, flew into the west side of the Pentagon.  Military fighters scrambled too late to intercept the flight.  Impact caused floors to partially collapse in three of the five rings forming the Pentagon.  Nearly 25,000 people, the usual population of the building on any given day, were evacuated.  Fires persisted for weeks, yet the Pentagon reopened two days later.  The 6 crew and 53 passengers of Flight 77 and 125 people in the Pentagon died in the attack. 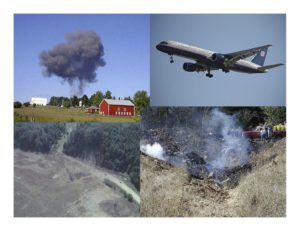 At 9:28 AM, after hijacked flights were flown into the World Trade Center, United Airlines Flight 93, departing late from from Newark NJ for San Francisco CA , was commandeered by 4 hijackers.  With the benefit of their late departure, crew and passengers were able to piece together what was happening in the other attacks.  The crew transmitted two May Day calls. Information from in-flight calls and flight recorders reveal the passengers attempted to regain control of the plane as it headed toward the District of Columbia.  At 10:03 AM, Flight 93 crashed near Shanksville in southwestern PA.  The impact created a crater 8′-10″ deep x 30′-50′ wide.  The 7-member crew and 33 passengers perished.  There were no casualties on the ground.